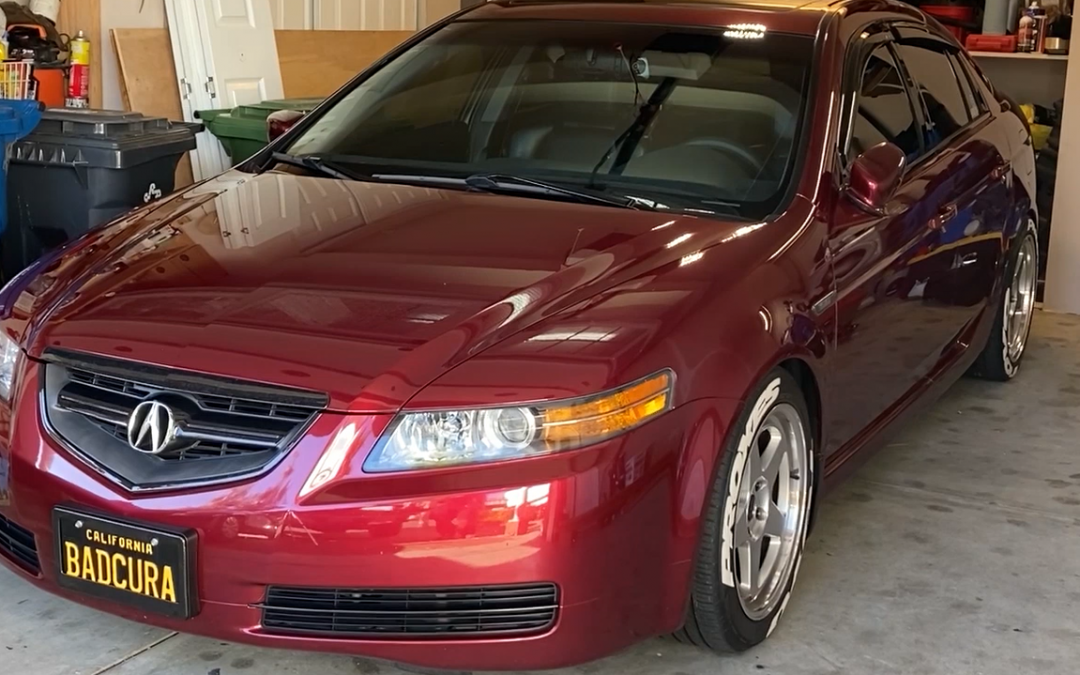 Here we go, on another ride along. We got an Acura that came in and this dent is on the rear quarter panel that needs paintless dent repair. We call it a dog-leg. You got the wheel, and then that little piece of metal that goes down by the wheel towards the middle of the car, it’s called a dog-leg. And the dent happened there. The customer doesn’t know how it happened, it’s just one of those things that happened in the parking lot. Today, we’re going to do glue pulling on that. It’s a good size dent. I think it’s this big, but I have to do glue pulling on it because I cannot get a tool behind it at all.

So here we are. We’re at the customer’s house, I’ve already introduced myself, but I want to show you guys the car and the job I’m about to tackle doing paintless dent repair. Let’s head on in. Here we go, Acura TL. That is one bad Acura. This thing is so clean. Original paint. Woo hoo. So clean, and here is the dent. See that dent right there. That’s Our glue pulling dent that we’re going to do today doing paintless dent repair. Here we go. There’s the dent, there’s my light, and hot glue. Some of my glue tabs and hammers.

So I’m all finished here with glue pulling on this dent. This thing came out, cherry. It came out so good. Customer was super happy. Amazed that it just gone, can’t even see any speck of it and left. I’m super happy with it, customer’s happy with it. This was a fun job. Took me a while. It was a fun job, especially doing it for such an awesome customer like that. Anyway, take care. See you on the next dent.

I am completely blown away. Jim left right now. You guys just seen that video. Let me show you what the dent looks like now. What dent? It used to be right here and you cannot see anything. I can’t see it. He literally… The body line is right here. The body line is completely straight all the way down. Believe that. What in the world? I cannot see anything. This guy is amazing. Dude. JS Dent Plus, he works all over the Bay area. Hit him up for a quote, send them pictures. It’s free, it’s quick. This guy’s amazing. Honestly, I can’t say enough good things about him.